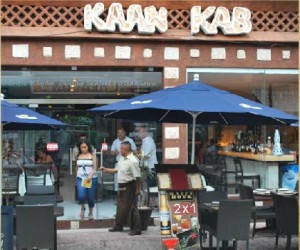 A girl shouldn’t have to cook for her birthday so we ventured into town for a celebration dinner. Playa Del Carmen’s famous 5th Avenue is packed with shops and restaurants, most of which cater strictly to the carnivorous crowd.  Hubby had printed out a list of vegan friendly place from Happy Cow but left it sitting on the table back in our hotel.  Grrrr….

One place had rave reviews and sounded perfect. The owners were familiar with what vegan and gluten-free meant and had three gluten-free, vegan options on the menu.  But with our notes sitting back at the hotel, we fumbled along. We had an idea of the cross street and that the name of the restaurant started with a “K”, but neither of us could remember the actual name. After walking and wandering and not finding it, we were getting really hungry.

We started reading menus and asking if food was available for “ve-he-tarian estricto”  (You must roll your r’s when saying.  Try saying estricto three times fast – I have trouble saying it once!)  After a few rejections,  we decided to ask the staff at at Kaan Kab, a Mayan Seafood and Steakhouse, nonetheless – but what the heck – it started with a “K”.  To our delight, they knew what we needed. We were treated to guacamole, corn tortillas, rice and an array of veggies sauteed in vegetable oil.  We also had some vino tino (red wine) and a great table on the street for people watching.

Ah Cacao
One indulgence we could continue, despite our new diet, was our visit to Ah Cacao – yummiest chocolate on the Riviera Maya and the 70% dark is vegan. We bought two bars and savored a few bites each day. A girl needs a little cacao on her birthday! 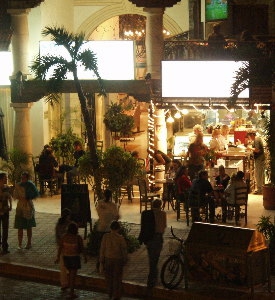 Vegan “Gelato” We stopped at a couple gelato shops on the walk back to the hotel and found some dairy free options. One had soy chocolate gelato and it was pretty good. We shared a couple scoops. Another, Aldo’s, had a lemon dairy free sorbet. Hubby said it was too sweet, so I didn’t have to share. It was my birthday, after all.