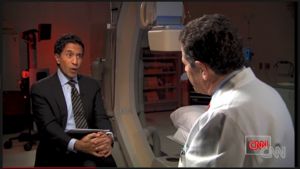 Most vegans know the benefits of a plant-based diet to their bodies. But I’d venture to guess, the majority of Americans have no idea how much diet can affect their heart – both good and bad. Did you know most heart attacks happen in people with no symptoms?

My sister-in-law, who our family would describe as the healthy one, had a heart attack in her late 50’s. No doubt, this inspired hubby. My dad, who was at a healthy weight, exercised most every day and ate fruits and veggies was lucky to catch his condition before an attack, but not before he had major blockage and now has four stents.

I’m not a doctor, but Sanjay Gupta is.  Listen to him, watch this CNN Video, and share it with someone you love. The Last Heart Attack might just save your life!