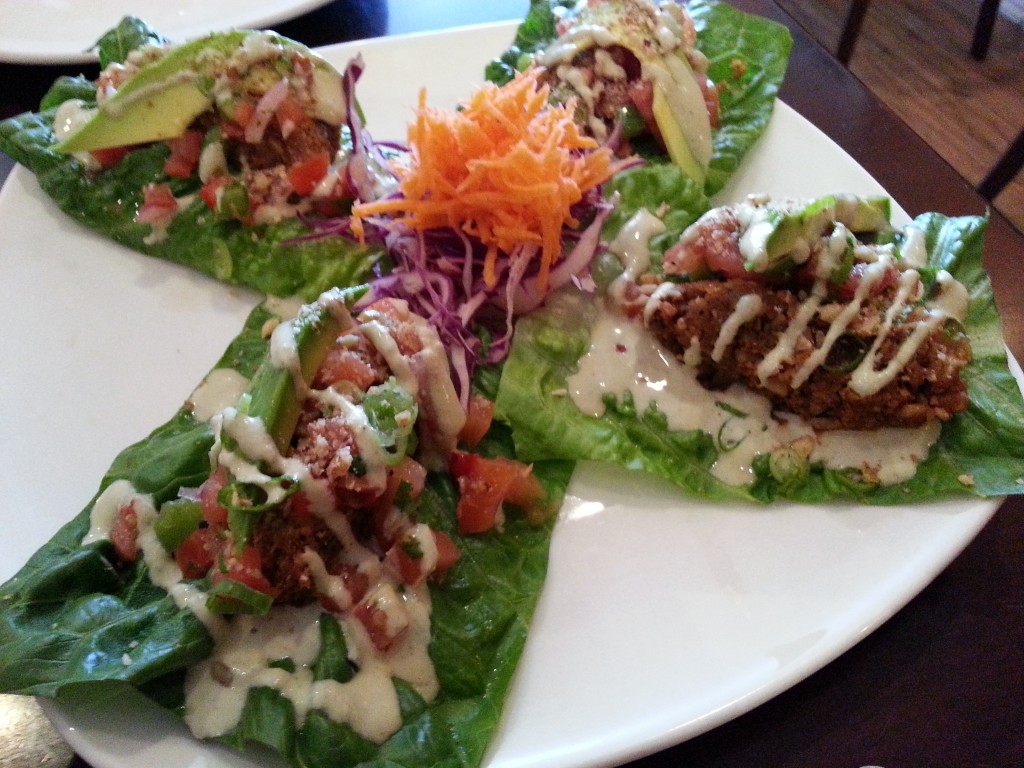 Monday, breakfast was a total bust. We attempted to go to Raw Star Café since it opened at 9:00 and all the other places didn’t open until 10:00 or 11:00.  When we arrived (a bit of a walk) it was closed.  Since we were only a couple blocks from Urth Caffé, we decided to check it out. The only gluten-free vegan thing on the morning menu was a pumpkin pie.  We had two slices.  It was fantastic. I also had coffee, which I was really overdue for. On the way back Raw Star was open and we stopped in, met Chef Bryan and bought some raw chocolate walnut balls.  They were $8 for four small 1” balls. I wouldn’t get more if we ever went back; they were not all that impressive, especially for the price.  Chef Bryan was very friendly and raved about his raw breakfast and that he was normally open at 9:00, however, we drove by the next morning and the place was dark again, so we didn’t get to eat there.

After our pie breakfast, we hopped back on the bus to go rent a car for the day. We had reservations for the Tonight Show and taking a bus from Santa Monica to Burbank involved two hours and three transfers. Since we were headed through Hollywood, I wanted to grab lunch at Sun Café.

After sharing some raw tacos, (pictured above) it was fabulous Pad Thai (raw) for me and Mac and “Cheese” (not raw) for hubby.  We were in a hurry because we had to get to the studio or we would have had some dessert and more pictures. I hope we can go back to Sun Café sometime!

Well, the Tonight Show turned out to be a total bust too.  No one told us (and we should have done our research) that you have to get there REALLY early to have a better chance at a seat.  We waited for almost three hours and didn’t get in. They offered everyone tickets (guaranteed) to another show, but we had to leave the next day, so no deal for us. I was sad and needing a vegan comfort snack.  Also, I wanted to try Café Gratitude and had heard so much about it. We had a car so off we went.

Café Gratitude is just too cool.  They have positive affirmations written for you on the bathroom mirror and the server asked us the question of the day, “What is your greatest accomplishment?” Hubby got the “I Am Strong” smoothie and I got the “I Am Awesome” encrusted eggplant (minus the panini).  “I Was Delighted”!  Too bad this place wasn’t closer to Santa Monica or we’d have gone back for “I Want Breakfast”.  They open at 8:00 am.

We took our time driving back to Santa Monica via Bel Air, Brentwood, Beverly Hills and Sunset Blvd.  Since M.A.K.E. was our favorite place near the hotel, we opted for one last meal there.  To our surprise, they had several new items on the menu and we caught a glimpse of Mathew Kenney himself. He had his graduate students preparing new creations. While it was tempting to order the same fabulous dishes we had a couple nights before, we opted to try some new items and shared three main dishes. 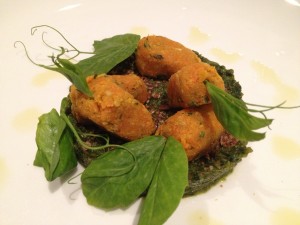 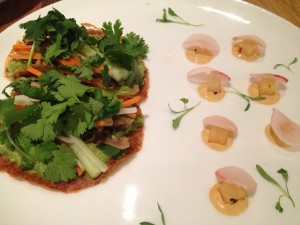 The dishes were beautifully presented, but this time, we didn’t feel the portions were quite as generous and while the flavors were nice, we weren’t blown away like we were the first night. There wasn’t anything on the desert menu that really grabbed us, so we opted to call it a night.